BJORN AGAIN are returning to their home city Melbourne to celebrate their 30th Anniversary tour – and you are invited to the party!

The key to Bjorn Again’s success is in not just delivering ABBA’s biggest hits to perfection in a lavish production, but incorporating a healthy dose of parody and stage theatrics. So beware of ‘Swenglish’ accents, flares and platform shoes, glitzy sequinned outfits, mountains of blue eye-shadow and all those daggy dance routines. This critically-acclaimed, world-class show generates an audience atmosphere that has to be seen to be believed. As in the words in Dancing Queen: you will have “the time of your life”.

Don’t miss out on this spectacular show! Suitable for all ages.

TICKETS ON SALE! GET YOUR TICKETS HERE 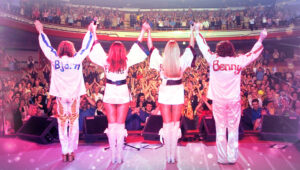